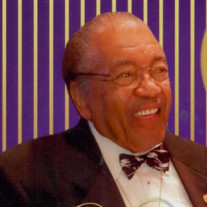 Charley Henry Bilberry Jr. was born to Dellie Dixson and Charlie Henry Bilberry Sr. on May 20, 1929. in Pine Bluff, Arkansas. He was an only child. Charley attended Merrill High School in Pine Bluff where he served as class president each year. It was there at age 17 where he met Lille Mary Smith. They united in holy matrimony on May 31, 1949. To this union, three children were born: Pamela, Preston, and Deborah. Charley attended Arkansas AM&N Collee where he was offered a full scholarship as a Varsity Debater. He was initiated into Omega Psi Phi Fraternity, Inc. Tau Sigma chapter, in November 1948. After moving to Detroit, Charley received degrees (BA and MEd) from Wayne State University. He joined NU Sigma chapter where he served as Basileus, Vice Basileus and Neophyte Commandant. In 1965 he joined Detroit's Nu Omega chapter where he remained an active member until his passing. Charley is a retired educator from the Detroit Public Schools. He served the school district from 1955 to 1989 as a Teacher, Assistant Principal, Principal, Personnel Administrator and Assistant Director of Human Resources. He was appointed by the Mayor of the city of Westland as a member of the Recreation Advisory Commission and as a member of the Human Relations Commission. He has been an elected member and Vice President of the Inkster Board of Education. Charley began a life of service to the church at a precocious age. He was raised as a Baptist at St. Peter's Rock Baptist Church in Arkansas. Charley and Lillie joined the Bilberry family as members of Canaan Baptist Church in Flint, Michigan. Finally, he and his family became members of St. Clement's Episcopal Church of Inkster, Michigan n 1965. Charley served St. Clement's in many capacities. He served as a Vestry Member, Senior Warden, Choir Member, Usher Board, Men's Guild, Lay Eucharistic Ministry, Warden of Lay Readers and Stewardship Chairperson. He received The Living Legend Award which is presented to an Episcopalian whose unique service impacts the public domain as well as their local church and community. Charley was also a member of United Negro College Fund (UNCF), 2+2 Couples Club and Del Nations Couples Club. Charley traveled extensively with family and friends. He enjoyed man cruises, many vacations, family reunions and enjoyed ownership of two timeshares in Hawaii and Mexico. Charley and Lillie were married 68 years before she passed in June 2017. He leaves to cherish his memory his three children: Pamela (Webster) West, Preston (Christine) Bilberry and Deborah (Ray) Dixie; three granddaughters: Robyn (Obinna) Asika , Rosalyn (Donnie) Smith and Corrine Bilberry-West; three great grandsons: Jordan Thompson, Gabriel and Jacob Asika; and daughter-in-law Lois Bilberry. He also leaves a plethora of cousins, nephews, nieces, and close friends.

Charley Henry Bilberry Jr. was born to Dellie Dixson and Charlie Henry Bilberry Sr. on May 20, 1929. in Pine Bluff, Arkansas. He was an only child. Charley attended Merrill High School in Pine Bluff where he served as class president each year.... View Obituary & Service Information

The family of Charley Henry Bilberry created this Life Tributes page to make it easy to share your memories.

Send flowers to the Bilberry family.