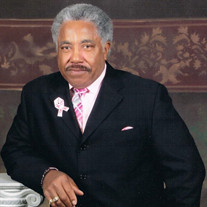 Charles W. Woodson was born October 24, 1951 in Buena Vista, Georgia. To this joyous occasion to his late parents Robert Henry and Johnnie Mae Woodson as they welcomed their second youngest of 16 children. He was preceded in death by 8 siblings Robert , Marion, James, Herman, Harold, William, Joseph, and Marba. Charles graduated from Buena Vista High School in 1970 and served in the United States Army for two years with a honorable discharge. He moved to Michigan in 1973. On his second day after arriving he was hired at Ford Motor Company and was dedicated to the company for 47 years. He met the love of his life, Brenda Logan in 1978 while working at Ford. They were united in Holy Matrimony on September 5, 1981. To this union 2 children were born, Charles and Nikki. Charles joined Womack Temple shortly after arriving in Michigan. He served as a dedicated member in several roles. Charles had a heart of Gold! He loved giving back to his community. He was dedicated to donating, feeding the homeless, and ones in shelters. He enjoyed fishing and traveling. His favorite vacation spot was "Down Hone" in Georgia. He would always drive and never needed a map. Most importantly he enjoyed time with family. He installed great values in everyone that was willing to learn. He was a man of value who improves the lives of those around him and loved without conditions. He leaves to cherish his memory; his loving and devoted wife Brenda; 4 children; Fred (Johnna), LaTrice, Charles, Nikki (Corey); 9 grandchildren; April, Anna, Olivia, Deondre, Breanna, Cherelle, Nekia, Nyla, Nia; 7 siblings Bernice (William), Ethel (S.T), Leroy, Albert, Otis (Mayola), Annie, Earlene and a host of in-laws, nieces, nephews, family and friends.

Charles W. Woodson was born October 24, 1951 in Buena Vista, Georgia. To this joyous occasion to his late parents Robert Henry and Johnnie Mae Woodson as they welcomed their second youngest of 16 children. He was preceded in death by 8 siblings... View Obituary & Service Information

The family of Charles Woodson created this Life Tributes page to make it easy to share your memories.

Send flowers to the Woodson family.