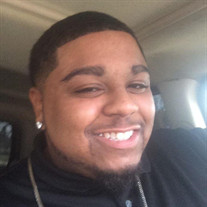 Charles Jerome Crawford Jr. was born on March 25, 1994 in Wayne, Michigan to parents Charles Sr. and Donetta Crawford. He was affectionately known as "CJ" by family and "Smoove" by friends because of his artistic creativity. He was the only son and 2nd born of three children. CJ was a vibrant, energetic young man with an infectious smile, who enjoyed a happy childhood. Charles Jr. was graduate of John Glenn High School class of 2012. He was active in school sports and was a member of the football and wrestling teams. After high school he explored several career options and eventually ventured into the field of truck driving, where he received his CDL certification. He enjoyed being a truck driver and was dedicated to his job, but he had other interests as well. CJ was also an entrepreneur who had a clothing business and owned his signature logo "Out of the Mud." He also had bean to venture into the business of music videos. Charles Jr. was a member of the Church of Christ (COC) in Southfield, Michigan and was baptized in Christ at an early age. He was involved in the youth ministry and various Christian activities. Church is where he grew in Christian values and statue. When the time was appropriate and after many months of training, he proudly completed the Boys to men Christian Manhood Rite of Passage. This was the beginning of his embracing adulthood. Charles Jr. was a loving son, who developed into a caring adult and responsible father to his four month son Gionni. He took being a "big brother" to heart and would do anything for his sisters Ashley and Tenisha, day or night. He often shared advice with them, such as, "Chess not checkers," meaning every move that you make has to be smart and make sense. His desire to share wisdom is also exhibited in his "Out the Mud" logo, meaning you have to work hard to make things happen. Charles Jr. made his earthly transition on September 8th, 2020. He leaves to cherish his memory: his parents, Charles Sr, and Donnetta Crawford; a young son Gionni Debron Crawford; special friend and the mother of his son, Jennifer Williams (Inkster, Michigan), two sisters: Tenisha Stephens (Detroit) and Ashley Crawford (Inkster); three nieces; Dejan'ae William, Dawnecia Stephens, and D'elic'ia Stephens, a host of uncles, aunts, cousins, friends, and a special circle of friends that he considered his brothers. Preceding Charles Jr. in death were his grandparents Marion and Martha Coats and Clinton and Ernestine Beard. CJ was well loved and will surely be missed.

Charles Jerome Crawford Jr. was born on March 25, 1994 in Wayne, Michigan to parents Charles Sr. and Donetta Crawford. He was affectionately known as "CJ" by family and "Smoove" by friends because of his artistic creativity. He was the only... View Obituary & Service Information

The family of Charles J. Crawford created this Life Tributes page to make it easy to share your memories.

Send flowers to the Crawford family.