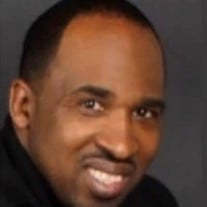 On a chilly spring day, Carl Frederick Davis was born on March 28, 1964 at Annapolis Hospital in Wayne, MI, to the most awesome parents, James Henry and Margaret Davis who proceeded him in death. At an early age Carl accepted Jesus Christ as Lord and Savior. He was baptized at Gethsemane Missionary Baptist Church under the pastorate of his uncle, Pastor Willie W. Davis. He truly served the Lord with gladness and believed in holiness. AT church, he initiated many events and played various integral roles. He served and directed the Mass Choir, Male Chorus and Praise Team. He also served as a Deacon, prayed for the sick and shut in, wrote and organized Christmas plays and programs, and provided leadership on search committees. Carl was a Worshipper and he loved to praise God. He exemplified his love for God by singing with all his might & would abruptly take off running during Praise Break. He took time to pour hope & encouragement into the lives of the younger generations which helped develop self-confidence. Carl attended Inkster Public School System where he matured and earned many accolades. In junior high he was part of the school's chorus and sang his first solo "Ben." At Inkster High School he helped start the young gentlemen's group, "The Fellas", and played on the tennis team. Carl was a proud Viking and graduated from high school in 1982. His accomplishments made his parents very proud and his angelic voice and love for music mimicked that of his beloved father who often became teary eyed watching him sing. His love for music continued into adulthood. He formed a group, "The Davis", with his siblings and sung and wrote many of the songs with producer Mark "Polo" Dixon. Carl respected traditional gospel music but also embraced and welcomed fresh new sounds, contemporary melodies, and rhythms which can be heard songs "Amazing," "Heaven," and "New Life In Jesus," just to name a few. Carl also loved his profession, working for Northville Public Schools. There, he worked with emotionally impaired & challenged students. After 30 years of service, he retired earlier this year in May. Carl, also known as Sugar Bear, lived a full and amazing life. He enjoyed family reunions, golfing, grilling and eating! He played basketball , horseshoes and fiddled n bass guitar. He was truly one of a kind. He loved people and his family. His personality could fit into any situation and his smile could light up a room. He was caring and confident. Funny and wise. He was stylish! He introduced many to GQ magazine and often received compliments on his attire. We could only go on about the things Carl enjoyed and loved. Most importantly, we want to share that Carl declared 2019 would be a year for family and family relationships. We, all, will miss Carl's smile, creativeness and gentle personality. He raised two handsome and respectful sons. Evan James and Myles Wade Davis with his former wife, Artist O'Rear. He adored his boys and cherished their lives. Carl took time out to have family devotion time and taught his sons to trust in their savior. As a family, they enjoyed numerous vacations o Walt Disney World. One year, he asked his siblings and their families to join them on vacation to surprise his sons because he knew they loved being around family just as much as he did. Carl's sons were purposely placed in the forefront of his life, making him an outstanding father. Carl departed his life Friday, December 20, 2019. He leaves to cherish his awesome legacy and loving memories, two sons: Evan & Myles; brothers; James, Jr. (Marna) & Nathan (Dayna) Davis; sisters; Angela Davis & Andrea Davis Cole; nieces; Erica, Renee, and Natelie; nephews; Jonah & Nathan Jr.; Godparents William & Lillie Powell; Best friend, Andre Healey; Special friends, Nike & Kim Kelly, and Joe & Sheila Samples, aunts, uncles, many many cousins, extended family and friends that he loved dearly.

On a chilly spring day, Carl Frederick Davis was born on March 28, 1964 at Annapolis Hospital in Wayne, MI, to the most awesome parents, James Henry and Margaret Davis who proceeded him in death. At an early age Carl accepted Jesus Christ as... View Obituary & Service Information

The family of Carl Frederick Davis created this Life Tributes page to make it easy to share your memories.

On a chilly spring day, Carl Frederick Davis was born on March...

Send flowers to the Davis family.