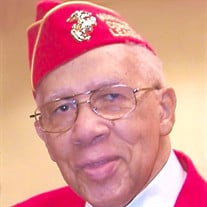 Calvin Cooper Shepherd was born on April 5, 1925 in Memphis, Tennessee and was the seventh child of Ivory Garfield Shepherd and Cora Cooper Shepherd. He departed his life on August 3, 2021 following a brief illness in Mission Hills, California. Calvin was known by many names to family and friends - Dad, Daddy, Pops, Coop, Cal, Choopie, Grampa, Paw Paw, B-Pa, Gran Gran and of course Mr. Shepherd. He was an original homeowner on the block on Ross Ave (St.) in Inkster, Michigan, where he resided for over 70 years and where he and his late wife Anna Prynsetta Newkirk Shepherd raised a family of five children. All in the area knew and loved "Mr. Shepherd." He graduated from Booker T. Washington High School in Memphis in 1943 and was drafted soon after into military services. Calvin chose the Marine Corps. He was a proud, decorated Montford Point Marine, (the first African American Marines in the United States) where he achieved the rank of Sergeant. He served in the Pacific theatre during World War II. After his honorable discharge from the United States Marine Corps, he enlisted in the Michigan National Guard. It was during that period he met and married Anna Prynsetta Newkirk. Years later, he became President of the Michigan National Guard 1279th Alumni Association which included the late Michigan Congressman John Coners among other distinguished Michigan residents. Calvin had a sharp, brilliant mind and would always remind his children about the importance of education. Calvin was a self-taught, fluent speaker of Spanish. While he and his wife raised their children, he worked full time as a lab technician at Ethyl Corporation. He also took on extra house painting and other odd jobs on weekends. He still made time to attend courses at Wayne State University in drafting and architectural design. His intelligence was not surpassed by his handiness. He could fix or install most anything around the house or on a car and believed that with the right tools and work ethic, one could accomplish anything. He, along with his brother Harry, brothers-in-law and father all joined together to raise the roof to add a dormer addition on the second story back of his Inkster home, which he designed to add extra room for his growing family. Cal was an avid model railroader. He would build HO scale locomotive engines (his favorite), train cars and scale model buildings all from scratch. Sometimes he used kits and special materials from hobby shops or would fashion a design out of old cereal boxes and paper towel rolls. In his later years, he reached his goal of building his own impressive railroad layout-complete with towns, tunnels, and landscapes - that circled the basement of his home. In addition to being a member of the Redford Model Railroad Club in Inkster and 1279th Alumni Association, he was active in the Montford Point Detachment #158 Marine Corps League in Detroit and the VFW. Calvin the baby of his family, is pre-deceased by his wife Prynsetta, eldest son Lynn Alan "Dickie Shepherd, youngest son Randall Keith Shepherd and all his siblings. He is survived by son Calvin Garfield "Gary" Shepherd /Lisa, son Dennis Newkirk Shepherd, daughter Dianne Prynsetta Bates/ Lindsey, daughter-in-law Annette A. Shepherd, granddaughter Dana Tyan Shepherd, grandson Eron Keith Shepherd, granddaughter Nicole "Nicci" Prynsetta Bates Amberg/Scottie, grandson Lindsey Everett Bates/Cherie, granddaughter Kensasha "Keni" Renee Shepherd, grandson Eric "Rick" Bates/Bryonia, granddaughter Erica Bates Buford/Joe, grandson Lynn Alan Shepherd, Jr., granddaughter Ayanna Shepherd, Nephew Carl L. Stone/ Diane, niece/goddaughter Patricia Ann Esters, nieces Celestine "Jane" Lemmons/Lamar, Roslyn Newkirk, Nancy Newkirk and a host of great grands, great-great grands, other nieces and nephews, cousins, neighbors and friends. https://registry.chapelchimes.com/

Calvin Cooper Shepherd was born on April 5, 1925 in Memphis, Tennessee and was the seventh child of Ivory Garfield Shepherd and Cora Cooper Shepherd. He departed his life on August 3, 2021 following a brief illness in Mission Hills, California. Calvin... View Obituary & Service Information

The family of Calvin C. Shepherd created this Life Tributes page to make it easy to share your memories.

Send flowers to the Shepherd family.