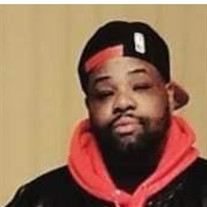 Calvin Goodwin Scott Jr. was born May 13th,1976 in Wayne Michigan to Calvin Goodwin Scott Sr. and Betty Ann Scott of Inkster, Michigan. Calvin Jr. was called home on November 20,2021 he was the fourth of six siblings. Calvin Jr. known as Boo-Boo (Boodogg) and attended the Westwood school district where he was known as a Gentle Giant. Calvin's first job after high school was Coldsaw Manufacturing in Inkster as a Press Operator, his current job was Universal Industrial in Romulus as a Hilo driver and a Material Handler for 5 years. On September 26,2021, Calvin Jr. took the hand of his loving wife Tanisha Collins in marriage. United they shared three beautiful children Calvin Goodwin Scott III, Anilah and Adleigh. Calvin was so excited to be a father and have a family of his own, he was committed to being a great provider for them. Occasionally he attended the family's church Pilgrims Traverlers Baptist (Rev. Knighten) in Inkster on John Daly. He and his family joined Redeeming Love Ministries (Dr. Yolanda Jones) in Westland, Michigan where he turned his life over fully to GOD. He was committed and dedicated. Calvin worked so hard to change his life. He succeeded! He was training to become a deacon in the church. He loved the Lord with all his heart. We should be proud to say that Calvin's job was well done. Calvin was a gentle soul and had a caring heart, when his parent's needed assistance in being cared for, he moved in to become their caretaker. He loved his family very much. Calvin was a good husband, son, father, brother, uncle and friend. his hobbies were watching football, basketball with his son, cooking, and playing video games. He also represented where he was from everywhere he went. Calvin Scott Jr. leaves to cherish in memory his loving wife Tanisha Scott, his parents Calvin Sr. and Betty Scott, mother-in-law LeeAnne Jones, sisters-in-law: Twyla and Tiffany Children: Calvin Goodwin Scott III, Bonus daughters, Anilah and Adeigh. Siblings: Carmelita, Bernard (Tonya), Sherita, Tracey and Terrence, Godbrother Lawrence Walker, Best Friends: Keilan and Rayfield and a host of cousins, nieces and nephews and great-nieces and nephews and friends. Calvin will truly be missed

The family of Calvin G Scott Jr. created this Life Tributes page to make it easy to share your memories.

Send flowers to the Scott family.