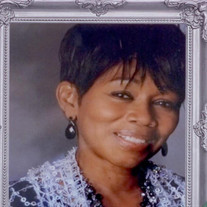 Brenda Estella Crawford affectionately known as "Fussier" was born to the late William and Ruth Crawford on October 24, 1950. She was their first daughter who cried so much that her father gave her the name. He would say, "Why are you so fussy," as he held her in his arms. Brenda was the sixth child out of ten. Six of her brothers preceded her in death, Sidney, John, William, Horace, Vernon Crawford, and Marvin Newson, all of which she was fond of, and one special nephew, Omari Cameron, whom she adored because she helped the doctor deliver him at the University of Michigan hospital. Brenda attended Inkster Public Schools and graduated from Inkster High in 1969. She went to work at the University of Michigan hospital in several different departments before landing a job as a Pharmacy Technician. Brenda was highly intelligent and could have been a Pharmacist because of her pharmaceutical knowledge. She had gifts that were hidden from others and only if you knew her you would have known. Brenda later left U of M after twelve years and went to work for St. Joseph Mercy Hospital and was there until she retired in 2015, after working for 36 years. Brenda had an passion for shopping, she could put together an outfit and look like a million bucks in it. Her clothing was the taste of elegance, and she wore them well. Brenda had many hobbies and tree if her favorites were rolling skating, dancing, and gardening. Yes, she was great at them! She always kept a beautiful yard full of colorful flowers and plants during the spring and summer months. Yes, her thumbs were green. Brenda won the Beautification Award for her yard in Hickory Hollow. She loved to listen to Gospel and Jazz music. Her most favorite time was spent with her grandchildren doing fun things. Brenda was faithful to her best friend and co-worker, Bethany Logan, who shared fun and memorable times together for decades. They were always there for each other and you would have not known that they were not blood sisters, because of the Godly love between them. Brenda gave her life to Christ and she was a faithful member of Pentecostal Temple COGIC in Inkster and was a faithful member of the Usher Board until her health became a challenge. She and her sister, Loretta would have their own Bible studies and Brenda wanted to learn all she could to know Jesus in a more intimate way. She loved the Lord and wanted to please Him with her life. Brenda departed this life and stepped into eternity on Wednesday, March 3, 2021 in the state of Georgia. She leaves to mourn her passing yet celebrate her life, three sons, Anthony Glenn, Juwan Lamar (Elisa), and Brandon James (Shatina) Crawford. Three wonderful and loving siblings, Loretta Cameron, and Deborah Ann Crawford, one brother Lenton Perry Newson, one aunt, Ethel Jordan, five grandchildren Jarell, Justin, Bryonn, Jayden, and Christina. One niece Stephanie Bass, five nephews; Marvin and Kevin Newson, Germaine Crawford, and Britton Grimes. Eighteen great nieces and nephews and a host of family and friends.

Brenda Estella Crawford affectionately known as "Fussier" was born to the late William and Ruth Crawford on October 24, 1950. She was their first daughter who cried so much that her father gave her the name. He would say, "Why are you so fussy,"... View Obituary & Service Information

The family of Brenda Crawford created this Life Tributes page to make it easy to share your memories.

Send flowers to the Crawford family.