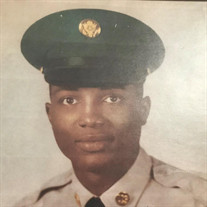 Booker T. Johnson, Jr., was born on August 7, 1944, to the union of the late Booker T. and Bessie Mae Johnson. Bessie remarried in the later forties to Mr. Booker T. Brown. Booker was the second of six children. The family moved to Romulus,... View Obituary & Service Information

The family of Booker T. Johnson created this Life Tributes page to make it easy to share your memories.