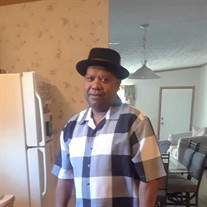 Today, we celebrate the extraordinary life of Bobby Fitzgerald Stewart. Bobby was born January 5, 1964 in Beulah, Mississippi. He was the twelfth child to the union of the late Leonard and Alma Stewart. His parents moved to Wayne, Michigan in 1966. Bobby confessed Christ at early age. Bobby attended Romulus Public School System, where he graduated from Romulus High School in 1982. He also attended Wayne State University. Bobby held several jobs since high school; working and becoming the man that he was raised to be. He eventually gained employment with Tower Automotive in Manchester, Michigan, where he remained employed for over 20 years until he retired. Bobby enjoyed spending time with family and friends, who were a very important part of his life. Bobby was the type of man that you could always depend on. He had a fun-loving personality and lived his life to the fullest. Bobby loved playing basketball, watching sports, shooting off fireworks for the holidays, barbecuing, and cruising in his car. To know Bobby is to know everything MUST be kept clean and organized. In late 80s, Bobby met the love of his life Theresa at the Big Park in Romulus, MI. To this union they have two daughters Lottie and T'Janetta. Bobby was loved by his family and friends dearly. On July 21,2021, we lost our angel Bobby. In addition to his parents, Bobby was preceded in death by brothers: L.C., Willie B., Charlie, Leonard, and Albert. As well as a sister: Dorothy Young. He was a devoted husband, father and grandfather, brother, and friend to so many. Heaven received an angel whose spirit lives on with his wife Theresa, his daughters T'Janetta and Lottie; four grandsons: Shannon, Lorenzo, Alonzo and Braylen; Three granddaughters: Shaquetta, Zoeyonna and Promise; three brothers: Charles Stewart, Harold (Shari) Stewart and Melvin Stewart; two sisters: Ann (Johnnie) Davis and Beria Stewart; two sisters-in-law: Patty and Shelia; one uncle: Watson Harris, and a host of nieces, and nephews, cousins, and friends who were truly enriched by his selflessness and total commitment to them. We loved and will miss you Bobby, rest in peace within the pearly gates of Heaven. Until we meet again.

Today, we celebrate the extraordinary life of Bobby Fitzgerald Stewart. Bobby was born January 5, 1964 in Beulah, Mississippi. He was the twelfth child to the union of the late Leonard and Alma Stewart. His parents moved to Wayne, Michigan... View Obituary & Service Information

Celebrating the Life of Bobby Stewart

Today, we celebrate the extraordinary life of Bobby Fitzgerald...

Send flowers to the Stewart family.