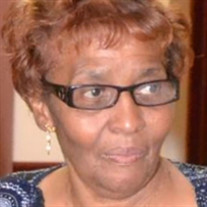 Mother Bessie Lee Gibbons was born on Tuesday, October 6,1942 to the late John Arthur and Ruby Lee Warner in Turin, Georgia. After having completed school, she decided to migrate to Detroit, Michigan to stay with a relative (Uncle Nate Upshaw) in the early sixties. It was not long afterward; she was able to secure employment with the University of Michigan hospital in Ann Arbor to work in the food service department. It was there that she met a dapper surgical technician, Ernest Gibbons. Well, as fate would have it, they dated and married on December 24, 1966. Bessie went on to mother four children; Angela, Kyra, Ernest Jr., and Jennifer and became a stay-at-home mom. Bessie and Ernest Sr. were married for 38 years until his death in 2003. To God be the glory.... Bessie surrendered her life to Jesus Christ and fully embraced holiness, then joined Pentecostal Temple Church of God in Christ, under the leadership of the late Bishop Isaac King Jr., as she remained a dedicated member under the current pastor, Kellen Brooks until her passing. Bessie belonged to the Mother's Board, was an advent student of Tuesday's Night Prayer & Bible Band. She would often assist in the Benevolent and Holy Communion Services; she was a great supporter of the Pastor's Aide Committee and an active participant of the Missionary Circle. She enjoyed traveling to the Church of God in Christ National Conventions, both in St. Louis, Missouri and with the local church supporting auxiliary events wherever possible. Bessie, along with her sister-in-law, Gladys Kroger (who was more like a sister) had a seamless relationship. The two of them were often together encouraging anyone who met them, to love the Lord and live Holy. Bessie's favorite scriptures: II Corinthians 5:7 For we walk by faith and not by sight. John 10:10 The thief comes only to steal and kill and destroy; I am come that they may have life, and that they might have it more abundantly. Bessie's favorite things..... One word....shopping! Mother Bessie really enjoyed shopping, buying shoes and designer bags (Michael Kors). She even became a member of the local Inkster Senior Alliance, so that she could continue to indulge in her favorite pastime. Red Lobster was her first choice when asked "where will we eat?" Traveling also made the list. Bessie was well traveled as she made frequent trips to visit loved ones for the likes of Alaska, Georgia, Nevada, Florida, Kentucky, South Carolina, and Texas. Bessie's sorrows... The loss of both parents, John and Ruby Warner, her beloved husband, Ernest Gibbons, daughter, Kyra and granddaughters, Tierra and Gabrielle. One sister, Johnnie Mae Strozier, Sister-in-laws, Francine Gibbons and Mert Russell. From labor to reward...... Bessie heard the voice of the Lord calling her home on Sunday, April 10, 2022, she answered the call. She leaves to mourn her love, life, and legacy, three loving children, Angela Gibbons Moore, Ernest (Shalonda) Gibbons Jr., and Jennifer Anderson. One bonus son, Glen (Diane) Gibbons, one sister, Jeanette Dennis. Two sister-in-law and two brothers-in-law, Lindberg (Mable) Gibbons, David Gibbons, and Gladys Kroger. Ten grandchildren, fourteen great grandchildren, God daughter, Melisa Johnson. Favorite cousin, Lil Junior and best friend Clara Heardon, and a host of nieces, nephews, and friends,

Mother Bessie Lee Gibbons was born on Tuesday, October 6,1942 to the late John Arthur and Ruby Lee Warner in Turin, Georgia. After having completed school, she decided to migrate to Detroit, Michigan to stay with a relative (Uncle Nate Upshaw)... View Obituary & Service Information

The family of Bessie Gibbons created this Life Tributes page to make it easy to share your memories.

Send flowers to the Gibbons family.