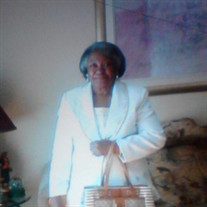 Bessie Mae Booze-Battle was born on March 18, 1942, to the late Christopher Frison and Emma Lee Jones, in Dublin, Mississippi. Bessie was the baby of thirteen children, all who have proceeded her in death. After her father passed, her mother moved to Inkster, Michigan, to be closer to family and pursue better employment opportunities. There were many struggles during her children years. Thankfully, her mother was a prayer warrior and when they encountered difficult times---she prayed! Her mother's example led Bessie to develop a relationship with the Lord at an early age. Bessie was a devoted member of Second Baptist Church in Inkster, Michigan under the leadership of Revered Hampton for many years. She then was led and remained a faithful servant of Cathedral of Faith in Detroit, Michigan, until the extended drive was no longer bearable. Closer to home, her last church home was The Old Landmark Church in Westland, Michigan under the leadership of Pastor Samuel Watson. Bessie attended Inkster and Dearborn Heights elementary and middle schools. At the latter, she enjoyed her time as a Mighty Bulldog softball player. Bessie graduated from Cass Technical High School in Detroit, Michigan. After high school, Bessie met Wilson Badon and daughters LeConia and Regina were born. In 1962, Bessie met and fell in love with her brother's best friends, Clyde Battle. After years of dating, Clyde asked for Bessie's hand in marriage and to this union, daughters Antoinette and Lee were born. Although Bessie spent her working years at Ford Motor Company, Bessie was a nurturer by nature, and upon her retirement, she opened an at-home daycare. It is impossible to count the number of people that consider Bessie a surrogate mother or grandmother. Her doors were open to potty-train, bathe, feed, and most importantly, teach about the Lord Jesus Christ. Bessie's kind and caring spirit was also evident as she served as the caretaker for her mother, mother-in-law, and father-in-law, until their passing. Bessie had a unique way of answering all her calls. Family, friends, or even total strangers received a beautiful, warm, BLESS YOU, greeting to bein their conversation. She was known for cooking flavorful meals and the best pound cake you ever tasted. Bessie loved to plant flowers, edge the grass, have children over to run and play, go shopping and play bingo. On major holidays, she filled her home with people, food laughter, and above all else--love. To cherish her beautiful, loving memory, she leaves her husband Clyde, four daughters: LeConia, Regina (Donald), Antoinette (Wendell), Lee (Willie). Eight grandchildren: Ja'Mah (Santreis), Timothy, Stephen, Leah (Desmond), Mintoria, Antonie, Motel, Anavia. Ten great-grandchildren: Raiven, Dimitria, Dajaleah, Donvonnah, Jordyn, Kai, Jaxon, Kayolani, Kalani, Keanu, Biscuit, and a host of nieces, nephews, and friends.

Bessie Mae Booze-Battle was born on March 18, 1942, to the late Christopher Frison and Emma Lee Jones, in Dublin, Mississippi. Bessie was the baby of thirteen children, all who have proceeded her in death. After her father passed, her mother... View Obituary & Service Information

The family of Bessie Mae Booze-Battle created this Life Tributes page to make it easy to share your memories.

Send flowers to the Booze-Battle family.