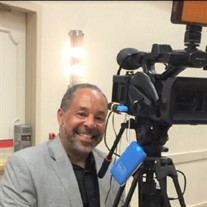 Anthony Nicholas "Nick" Jones was the first born son to the union of Gerald M. Jones and Alberta Spencer-Jones on May 3, 1965 in Wayne, Michigan. Both of his parents preceded him in death, along with maternal grandparents, Nathaniel and Martha Spencer also preceded him death were his uncles', Paul Davis Jones, Jr. and Nathaniel Spencer, Jr., and cousin Aaron Gentry-Spencer. Nick attended the Westwood Public School District and graduated from Robichaud High School in 1983. He attended Alabama A & M where he pledged Kappa Alpha Psi Fraternity Incorporated "Dream Team 1986" line. Nick was a true dreamer and had so many great ideas. He was the "Entrepreneur" of the family. He was the "Videographer Extraordinaire". Nick accepted Christ at an early age. He was baptized at First Missionary Baptist Church by the late Rev. Aaron Butler, Sr. He joined Pentecostal Temple C.O.G.I.C. 17 years old. He was the example of a great Christian Man. Nick would help anyone. On the holidays he would go help serve the homeless. He was the church videographer as well as the community. He taped weddings, family reunions, birthday parties, dinners, class reunions, graduations, showers, football, and basketball games. If it was something that needed to be taped, Nick was the man for the job. He also commentated the basketball and football games with Charles "Chop" Gregory. He was very creative. Nick was sharing his talents with anyone who wanted to learn. He was teaching his craft to the young children at his church. Nick was an unselfish person. He truly was a giver. Nick was employed and retired from Chrysler. Our family, his church family, our community, and all his friends have lost a true soldier for the Lord. Nick's goal was to get everybody saved. One of his favorite scriptures was Romans 10:9-10 - If you declare with your mouth, "Jesus is Lord," and believe in your heart that God raised him from the dead, you will be saved. For it is with your heart that you believe and are justified, and it is with your mouth that you profess your faith and are saved. Nick's memory will be cherished by all of those who loved him: his loving brother, Alvin Christopher Jones, Sr.; devoted grandmother, Bessie Jones; nephews: Quinton and Alvin Jones, Jr.; niece, Elicia Allante' Jones; great nephew, Nas Karrell Burns; Aunts: Martha Jean Weber, Melodie Jones, Janice Spencer, Tina Patton and Doris Spencer; uncles: Larry (Beverly) Spencer, Stanley and Dennis Spencer; great aunt Versie (Cicero) Johnson; cousins: Barbara (Rev. Willie) Cooper, Michael, Elisha, Nathaniel III, Larry Jr., Stephen, Brandon and Evan Spencer, Sarah Kennedy, John and Jimmy Small and Anthony Jones; his Godmothers: Ms. Muriel Wellons, Devaria Smith and Dr. Retha Flowers.

Anthony Nicholas "Nick" Jones was the first born son to the union of Gerald M. Jones and Alberta Spencer-Jones on May 3, 1965 in Wayne, Michigan. Both of his parents preceded him in death, along with maternal grandparents, Nathaniel and Martha... View Obituary & Service Information

The family of Anthony "Nick" Jones created this Life Tributes page to make it easy to share your memories.

Anthony Nicholas &quot;Nick&quot; Jones was the first born son to the union...