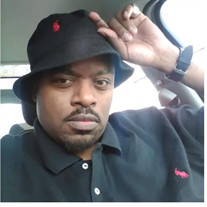 Andre Latef Grace Sr. born to Sidney Claude Grace and Carolyn Louise Marshall October 19,1969 in Detroit Michigan. He transitioned to eternity December 5, 2020 after a long battle with sarcoidosis. Andre graduated from Wayne Memorial High School in 1988. Then went on to William Ford Career Technical Institute where he studied electronics and auto body painting. After he finished school, he went on the pursue his creative passion which was painting and restoring cars old and new. He was a skilled professional, a master at his craft, and it fueled him to open his own body shop in Inkster where he created endless custom designs and original creations. Andre Sr. was baptized on 3/25/1979 as a member of Middlebelt Baptist Church in Inkster, MI., where he sang in the choir. Participated in youth groups a Bambi Lake with the present Pastor Larry Johnson. He continue to stay close to the church. Assisting his mom on the building and grounds ministry. Andre Sr, was also a Boy Scout, his scout leader was his step dad Harry Cook. In June of 2004 Andre married Towana Massey, and they went on the have a son Andre Jr. during their union. Junior was Andre's pride and joy, an as a father he was always present for all of his many endeavor. He later went on to meet his love Teresa was a big part of his life and he became a father figure to her two kids. Andre was the only boy growing up in a household with four sisters (imagine that)! He quickly became the giant among us; he was tough and showed very little weakness. He thought he was all of our daddy, bossing everybody around, and telling us what to do! Being the only boy in the family, our mother wanted him to have some masculine influence. So, he formed a brotherhood with cousins, Al, Earl and Rufus. Andre and Earl were so close, spending nights and growing up together as best friends and brothers. He wanted to teach Earl everything he knew about cars. Ronnie Pankey, also a best friend, he and his family became our family. They were like the "Huxtables" of the neighborhood. Andre also admired his friend Sean Rogers, he thought he was the coolest guy walking. Sean became a big brother figure to Andre, teaching him how to customize bikes and fix anything electronics. Later to become bosom buddies with his "first born" nephew Charles in whom he shared a tight bond. He was a "Classic Man" with an impeccable sense of style, who dressed as good as any rapper with his designer labels. "Only the best for the bet". Andre is survived by his mother Carolyn Perkins (Richard), four sisters Michelle Grace, Claudia Gathers, Nshombe Cook, and Akoswa Frye. Two additional siblings from his father Sidney Grace; Tiffany Grey and Jermaine Smith. His only son Andre Jr., Uncles Rufus Marshall and Alfonzo Marshall (Rhonda) Aunt Clementine Clobert (Earl). As well as a host of cousins, nieces, nephews, relatives and friends.

The family of Andre L. Grace Sr. created this Life Tributes page to make it easy to share your memories.

Send flowers to the Grace family.