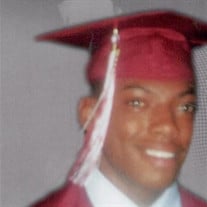 Andre Dovoelle Corbin was born on July 10, 1985 to Andra Major and the late Renellda Patricia Corbin. While his biological parents were instrumental in his upbringing, he was raised in the care of Darnetta Corbin-Leak. As a result, Andre was a "village child", so he was blessed with many mother and father figures and mentors along the way. Andre confessed Christ early in life and was a lifelong member of St. John A.M.E Church in River Rouge, Michigan. He also received his education in River Rouge and graduated in 2003. He later attended Henry Ford Community College in Dearborn, Michigan. Andre served in various vocational capacities before relocating to Columbus, Ohio, where he met his love, Jessica Downhour. Most recently, he worked at Solar Panel as a laborer. "Dre", as he was known to family and friends, was a fighter. Despite weighing 1lb. 2oz. at birth, he blossomed into a hardworking man who obtained a brown belt in karate and loved bowling and traveling with his mother. He was a member of ROTC in high school, a member of James Hannah Navy League Sea Cadets for six years, and a member of Edward L. Harris Lodge #514. Andre also loved to cook, and even as a teen, he would surprise his mother with dinner after she came home from work, and he would ensure that the food was properly presented. Andre had a giving spirit, and he was always willing to help others. He will be remembered most for his smile that brightened even the darkest days, his sense of humor (especially when he connected with his cousin, Marlow) and his ability to go with the flow, no matter what the challenges he faced. He will never be forgotten. On September 1, 2019 (exactly 22 years after the passing of his birth mother), Andre entered a peaceful rest. He leaves to rejoice in his memories; his father, Andra (Sandy) Major; his surrogate mother, Darnetta Corbin-Leak; four siblings, Tomika (Marco) Muller of Las Vegas, Nevada, Re'Keyia (Amadou) Sanghott of Columbus, Ohio, Arsemon (Kacey) Corbin, and Andrea Major; his parter, Jessica Downhour of Columbus, Ohio, four uncles, Donald Corbin, Olanda (Janice) Corbin, Keith Coney, and Larry Major; four nieces, Ieshia Corbin, Ilexis Corbin, Kaylynn Corbin and Kylah Turner; three nephews, Ivontae Corbin, Brandon Corbin, and Maliek Corbin-Sanghott; three Godbrothers, Wardell Isaiah, and DeAndre Wheeler; two Godchildren, Amya Foster Jose and Nevaeh Wilson; his village, Dawson Singleton III, father figure, Dr. Elizabeth Moore-grandmother figure, and Robert "Bob" Hill-mentor, and a host of other relatives and friends.

Andre Dovoelle Corbin was born on July 10, 1985 to Andra Major and the late Renellda Patricia Corbin. While his biological parents were instrumental in his upbringing, he was raised in the care of Darnetta Corbin-Leak. As a result, Andre was... View Obituary & Service Information

The family of Andre Corbin created this Life Tributes page to make it easy to share your memories.

Send flowers to the Corbin family.