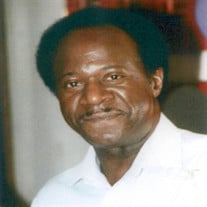 Anderson “Preacher’ Wade Jr. was born September 29, 1937 in Little Rock, Arkansas. He was the fourth of ten children born to the late Anderson Wade Sr. and Bedie Guess Wade. His sisters Vergia, Florida, and Lottie as well as his brothers Winston, Roy, Carbin, Herman, Jerry, and Calvin proceeded him in death. As a young child Anderson moved to Michigan and attended Inkster High School. In 1961 He married Joyce Vinson and to that union two sons, Bryon Edwin (who proceeded him in death) and Anderson Junior were born. Although the union was dissolved, Anderson and Joyce worked together to parent their children. Years later, Anderson was blessed with his only daughter Patricia Rhea with Saundra Rhea. During his next chapter in life, Adrienne Walls became his life companion and she blessed Anderson with a son, Nathan Uriel. Adrienne “Sophie” assisted Anderson with his care as he faced life challenges with strength and grace. Anderson earned the nickname “Preacher” early in life. Much like the old westerns he loved to watch, he said what he meant and he meant what he said regardless of the repercussions. Preacher was his own man. He didn’t waver to the left or to the right-he followed his own path. Not a person to seek you out often, he was always available and ready to help when you reached out to him. Preacher worked 30 years for Ford Motor Company at the Michigan Truck Plant in Wayne Michigan and retired in July 1995. Anderson was highly skilled and could build or repair almost anything. He was a man of many talents, but he excelled in carpentry and auto body repair. With his signature toothpick in his mouth, he enjoyed life and spending time with friends and family. He was always ready to play croquet, pool, or join a good poker game. His favorite recreational pastime was visiting the “one arm bandit”. Preacher truly enjoyed spending time with his family and was always glad to see his children, grandchildren, nieces, and nephews when they came by. Anderson Wade Jr. Made his transition on July 15, 2020 at Garden City Hospital. He leaves to morn his passing sons Anderson (Afreida) and Nathan (Alisha), daughter Patricia (Demetris), grandchildren Sylvia, Alexis, Ariana, Kaison, and Nathan, life companion Adrienne Walls, Uncle Madison Guess, sisters-in-laws Delores, Pearl, and Velma, as well as a host of nieces, nephews, family, and friends.

Anderson &#8220;Preacher&#8217; Wade Jr. was born September 29, 1937 in Little Rock, Arkansas. He was the fourth of ten children born to the late Anderson Wade Sr. and Bedie Guess Wade. His sisters Vergia, Florida, and Lottie as well as his... View Obituary & Service Information

The family of Anderson Wade Jr. created this Life Tributes page to make it easy to share your memories.

Send flowers to the Wade family.