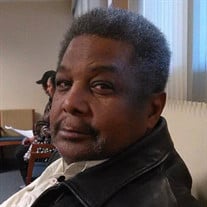 Alonzo Richard Dixon Sr., was born on January 31, 1947 to the late Sim and Irene Dixon. He was the oldest of three born to this union: Richard, Arlene and Konrad. Alonzo accepted Jesus Christ as his Lord and Savior as a child while attending church with his mom, who he adored. Richard was a mama's boy. His mom would always say, "What are we going to do with Richard, Oh my God!" Richard attended Inkster Public School System and graduated from Inkster High School in 1966. He was later drafted in the U.S. Army in 1967. After being honorable discharged from the US Army, he met and fell in love with Deborah M. Driscoll of River Rouge, Michigan. He would walk all the way from Inkster to River Rouge to see her. On April 26, 1968, they were untied in Holy Matrimony. To this union four children were born: Alonzo, Ursula, Marcael, and Devon. Richard and his sister, Arlene are 11 months and one day apart, they grew up like twins. Richard loved to fish. He and Marcael would fish all day. They would be out on Lake Michigan like the Deadly Catch. He would drag all the fish he could through her front door, but she knew how to handle him. He couldn't control her house like everyone's else (LOL). If you've ever had the privilege to sit around them it was like having a front row seat to the Sanford and Son or Richard Pryor Show, the jokes neve end. Richard later had another son, Kenrontae, who he loved very dearly. Richard really loved all his children and provided for them effortlessly. He really adored his grandchildren; they all gave him bragging rights. He was a proud grandfather of seven. When he heard that Lil Alonzo gave all three of his children the last name Dixon, he was proud. He would say "That's my BOY, the name stays at home." From Ike Turner in (What's Love Got To DO With It)> We all just laughed, because that was who Richard was, a jokester. He was employed at Chrysler and if you knew Richard, he didn't like taking orders, from many so he decided the factory life was not his calling. His mom send him to truck driving school. He drove trucks for 30 years when he decided to retire and said they can have his truck. He never looked back. Richard was a jack of all trades. Richard was a sharp dresser. He loved to listen to Barry White, Marvin Gaye, Teddy Pendergrass, and John Travolta- Staying Alive. He used to drive the kids crazy listening to "On the Road Again" by Kenny Rodgers. I think he played that song 100 times going up I-75. Richard would say "I could drive from Inkster to Knoxville with my eyes close". Richard's mother was raised in Knoxville, TN, where he loved going to visit family. So much so, he decided to move to Knoxville to start a new chapter in his life....papa was a rolling stone. You couldn't tell him nothing, had his arm out of the window with a jerri curls blowing in the wind. Richard left Knoxville and took his children to Atlanta, where he was ready to the next level in life. He loved Atlanta and all the fun he had with his new friends that made him out of family. He traveled the world and did any and everything a person wish they could. He later decided to return to Detroit, Michigan to live near his family. Richard spent countless hours with is brother Konrad at Dixon's Towing. They were not only brothers, but were the best of friends. Dixon Towing was a place of fun times and was known as the club house. Richard had nicknames for everyone rather it was nappy neck, the wrongs, Jethro, simple, and Marlene. Richard famous phrases were "Spare Me" and "An All". He was so happy when his brother got married. He enjoyed watchin his niece and nephew, Moe Moe and Konrad, play. That Moe Moe kept if going, she was his twin, people would say. He loved all his nieces and nephews: Krystal, Narkita, Konrad and Gloria (Moe, Moe). Richard loved him some Ursula, his only daughter. He was at their home so much it drove her husband, Mack, nuts. He loved to be around the Wright family and their friends for more laughter and fun. A BBQ wasn't a BBQ if it wasn't at Mack and Ursula's house. Richard will truly be missed. If you find yourself driving up I-75, think of my daddy. God never said the road was going to be easy, but Richard enjoyed the ride. In his final day, he called out to his mother and she came and took him home. No more pain. Job well done Richard. Richard is preceded in death by his parents: Sim and Irene Dixon; his son, Devon Dixon and grandson Dekeil Lockhart. He leaves to cherish his memories his children: Alonzo (Beatrice) III, Ursula (Mack), Marcael, Kenrontae; siblings: sister; Arlene (Curtis) Appleby; brother; Konrad (Gloria) Dixon; nd grandchildren: Alonzo IV, Juanita, Marquis, Mackyiah, Mariah, Zaire, Malcolm, Alex, and Kamdyn. A special thank you to Deborah Driscoll, our MOM for spending the last year of taking care of our Father.

Alonzo Richard Dixon Sr., was born on January 31, 1947 to the late Sim and Irene Dixon. He was the oldest of three born to this union: Richard, Arlene and Konrad. Alonzo accepted Jesus Christ as his Lord and Savior as a child while attending... View Obituary & Service Information

The family of Alonzo Dixon Sr. created this Life Tributes page to make it easy to share your memories.

Send flowers to the Dixon family.