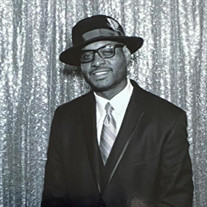 Adrian Anthony (Tony) Cruse was born on November 11, 1975 to Michael E. Cruse and Diana C. Cruse in Wayne, Michigan. Tony came in weighing 9lbs 3oz, had a head full hair, and big round hazel eyes which later became his signature. Tony was a devoted son to his parents and honored them as God’s word instructed him to do. Tony definitely made his parents proud. Tony was raised on a strong spiritual foundation and dedicated his life to Christ at an early age. Tony was steadfast in his belief and faith in God throughout his life, and God’s word was hidden in his heart. Tony graduated from John Glenn High School in Westland, Michigan, Class of 1994. Shortly after high school Tony began working at Delta Airlines where he was gainfully employed for 21 years; and if you knew Tony, you know he had an impeccable work ethic. Although Tony did not have any biological children, he had the opportunity to be the most excellent uncle and father-figure this side of Texas. Tony always made sure his niece and nephews had what they needed and some of what they wanted, he always had their best interest at heart and was their biggest supporter. Tony accomplished a lot during the short-time God allowed, and he lived his life to the fullest. Tony traveled regularly and simply enjoyed being in the company of “his people”. Tony was known to throw the best Super Bowl and NBA Finals party. Tony also especially loved his Delta Airlines family and looked forward to attending the annual Christmas party every year. Tony also had a passion for fancy cars and sharp garments, he loved to look at himself in the mirror once he was all dressed and ready to go, however, the value of these items were not important to Tony because he was also known for giving these same items away, Tony was that type of person. Tony was a loyal son, brother, uncle, nephew, great-uncle, cousin, and friend to so many, and he will be sorely missed. On Friday, October 2, 2020 Tony completed his work and answered his Saviors call. Tony is preceded in death by his sister Lisa M. Cruse, his Uncle Patrick (Anthony) Cruse, his aunt Cheryl A. Jones, and his grandparents and great-grandparents. Tony leaves to cherish his memory, his mother Diana C. Cruse, Father Michael E. Cruse and bonus-mom Valerie Cruse; his sister La Shawn D. Strickland (Anthony), brother Theodius Hawkins and Sister Quita Gulley; Auntie Kathy Richardson; 1 niece Shelby Cruse, 3 nephews Brandon Westbrook (Astondia), Shauntice and Caree Westbrook; 2 great-nephews Kamari and Daniel, 2 great nieces Kindall and Lauren, and a host of cousins, friends, and his best friend Bronson (Sam) Bell (aka Yella).

The family of Adrian "Tony" Cruse created this Life Tributes page to make it easy to share your memories.

Send flowers to the Cruse family.